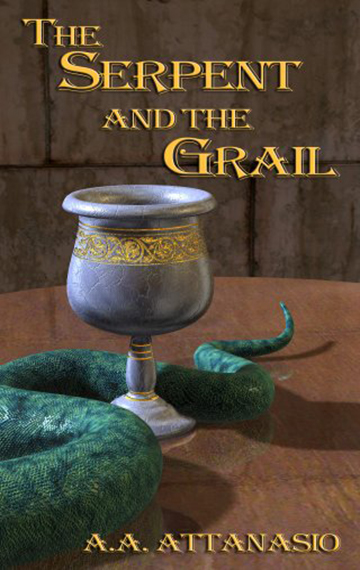 The narrator is Rna, a clan woman 90,000-years-old. She is eldest of the Nine Queens of Avalon. The place is Roman Britain, A.D. 491 on an alternate Earth, where Camelot is a monumental quantum gate to other worlds—

The boy-king Arthor has beaten back the berserker wolf warriors of the Saxon god, uniting his island kingdom—but at terrible cost. The Grail, the chalice of the Last Supper and the magical shield of Britain, has been stolen.

Without the Grail’s protection, Britain lies parched and barren, a demon-haunted landscape. To find the Grail, Arthor’s mother, Ygrane, must strike a dark bargain with Bright Night, elf-prince of the “pale people,” in the hollow hills.

Merlin alone can show the way. But it is Arthor who must confront the Serpent, sword in hand, to fulfill the ancient blood rite of kings—and transform himself to King Arthur.